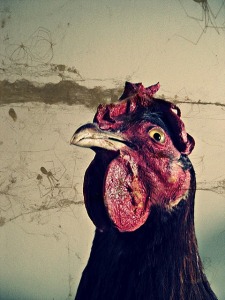 In her childish merriment Sabrina forgot the terror that lurked just beyond the cottage door.

She reached into the old chest and scrounged around until she found it – the blue dress with the broken zipper in the back.  It was her aunt’s old prom dress handed down to her sister for a dress-up dress and now it was hers.  She slipped it on over her clothes and dug into the trunk for the pair of gold high heels.

She stood back and admired herself in the mirror on the wall.  The blue in the dress made her hazel eyes sparkle.  She took several strands of beaded necklaces and put them over her head one at a time.  Then she adorned both wrists with half a dozen bracelets each, placed a ring on each finger, and topped it off with a tiara which she gently placed on top of her blonde curls.  She picked up the bottle of lilac perfume and unscrewed the lid.  She dabbed each of her wrists and neck just as she had watched her mother do.  She brought the bottle to her nose and took a deep sniff.  She set the bottle back down and twirled and watched her reflection.

“Now, it’s time to go visit Nana,” she said to herself as her large eyes scanned the room for her picnic basket.  She found in the top shelf and skipped into the kitchen with it in the crook of her arm.   She opened the refrigerator and took out some cheese.  She spread a tea towel on the counter.  Then she went to the cupboard and pulled out crackers,  raisins, and trail mix and laid a handful of each on the tea towel.  Then she tied it all up into a neat little bundle and set it inside her basket along with the cheese.

She whistled as her little fingers worked.  Without a care in the world, she skipped of out the front door and out the gate past the picket fence.

She had just shut the gate when she remembered.  But it was too late.  He was on the loose.  She heard his fiendish cry and saw his red wings expand.  In a matter of seconds the beast’s beady eyes were peering into her own.  She screamed in terror, but it was no use there was no one within the sound of her small voice.  She cried out in pain as his sharp beak attacked the soft flesh and scarlet drops of blood streaked down her plump ivory legs.  She tried to kick the fiend, but he only flew back at her in a sadistic rage.  She ran as fast as she could to get to higher ground.  She tripped and the basket went one direction the cheese another.  The rest of the contents were left scattered on the ground at the scene of the attack.

She reached the swing set and climbed up the ladder and screamed and cried while the beast continued his assault.

Her mother working in the garden looked up from the row of potatoes she was planting and saw the rooster had once again taken Sabrina captive.

For the last time.

This entry was posted in Uncategorized. Bookmark the permalink.